Quakers at the Edinburgh Fringe 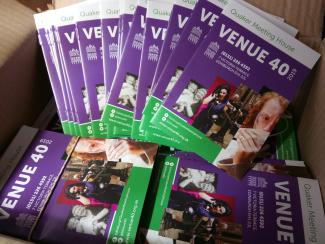 For the 31st year, Quakers will turn the Edinburgh Quaker Meeting House in Victoria Terrace into Fringe Venue 40, offering shows, workshops and a café, and raising money for charity.

Venue manager Sue Proudlove says “we try to offer a programme that springs from our Quaker values of peace, sustainability, truth and equality, but which also reflects our sense of fun”.

Venue 40 regulars, The Sorries, sing, play and banter their way through traditional Scottish and comic music. Returning for a second year is last year’s must-see health-and-safety comedy Accident avoidance training for cutlery users. In “pay what you can” charity performances, local Quaker Majk Stokes is joined by Beth Clarke with home-grown music, gentle humour and the serious message of Make tea, not war.

Peace is the theme of two free events from 5-10 August. An exhibition on Scottish Resistance to WWI documents the experiences of conscientious objectors, who refused to fight. With Quakers and the Edinburgh Peace and Justice Centre, visitors can make origami cranes to add to an exhibition of 140,000 cranes, which will mark the dropping of the nuclear bombs on Hiroshima and Nagasaki at the end of WWII.

According to Sue Proudlove, “visitors often say the Meeting House is an oasis of calm in the middle the busy-ness of the Fringe”. As well as daily public Quaker Meetings for Worship throughout the Fringe, there are times to take a break in the meeting room in silence. The Quaker-run Art and witnessing workshop (13-15 August) starts with a trip to Crammond beach.

From 19-23 August, Venue 40 hosts Luath Press's ScotlandsFest 2019, with 15 conversations about Scotland's politics, history, poetry and art from figures including Gerda Stevenson and Henry McLeish. Topics range from Oor Big Braw Cosmos via Meaning and mystery: the standing stones of Scotland and Paolozzi’s Edinburgh: sculpture and streetscape to Going green: the art of living well and The Scottish Parliament 20 years on: visions of Scotland the Brave.

Reflecting the Quaker commitment to equality, the venue prides itself on being fully wheelchair accessible. Venue 40 depends on Quaker volunteers, and this year is supporting three charities: the local Grassmarket Community, which supports vulnerable people in Edinburgh, Mary's Meals, and Quaker work for peace and justice.