Songs from the Southside 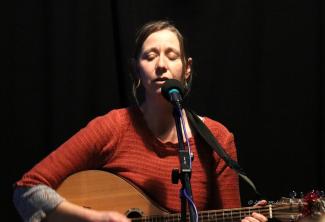 Beth writes and sings songs about all sorts of things: the trials of lockdown, relationships that work – and ones that don’t – and lesser-known minor deities. And cats – she really loves cats – but she surprised herself last year by writing a song about dogs. She loves to laugh, so there will definitely be some humour along the way. She also loves a poignant song, so you’ll be treated to a few of those too. She never could master the guitar, which mangled her fingers, but she has managed to get to grips – at least somewhat – with a gorgeously mellow mandola.

Beth grew up in the south of England­ and she now lives on the Southside of Edinburgh, her beloved adopted home city which features in many of her songs. Clerk Street, the Royal Mile, Craigmillar Castle Park, Aberlady Bay and the infamous Edinburgh haar all make a guest appearance.

A regular at the Out of the Bedroom open mic night, she is really looking forward to making her debut as a solo act on the Edinburgh Fringe.

This is a charity gig by donation - suggested donation £7 - with all proceeds going to the Grassmarket Community Project in Edinburgh and Quaker work in the UK and abroad, so there are no tickets. Just turn up and donate on the door – cash only: no cards! – or email Beth at c.clarke01@btinternet.com for bank transfer details.